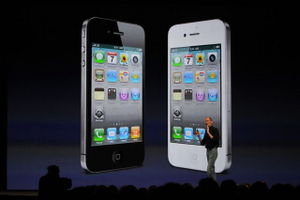 The Apple WWDC 2010 keynote is ongoing as I’m writing this, so I thought to give you the really hot news about the new iPhone 4, which seems to be way superior to all previous iPhone models. One of the changes which will have a big impact on accessories is the shape: there will be a huge demand for iPhone 4 cases, I am sure. With more than 100 new features, Steve Jobs didn’t have the time to go through all of them, but he quickly covered the most important ones:

Retina display is a new technology, never used before in cell phones, which offers a very sharp image, thanks to its pixel density of 326 ppi. It is called “retina display” because 330 ppi is the limit of human retina at 10-12 inches distance between the eye and the watching point. Apps, games and photos look stunning, thanks to the high resolution of the display.

The A4 chip is very small. The battery is the biggest component of the phone, offering 40% more conversation time, 300 hours of stand by, 40 hours of music, 10 hours of video, 6 hours of 3G web browsing or up to 10 hours WiFi browsing. This battery is recyclable, according to the iPhone 4 environmental report card which was shown during the WWDC presentation.

The gyroscope is that device which makes the image change position on the display when you rotate the phone. The combination of Gyro and accelerometer gives an amazing 6 axis motion sensing. That’s so cool for games and other apps! Other sensors: ambient light sensor, compass and proximity sensor.

The backside illuminated sensor allows taking very good photos, even though the camera features only 5 megapixels. The camera can record video in HD. Videos are editable directly on the iPhone, thanks to the iMovie application.

This application has the ability to read .pdf files, highly expected by iPhone fans.

The new operating system, iOS4, can do multitasking and it features retina display integration, camer and photo applications and many others.

This is an ad serving network which will become operational July 1st 2010.

Steve Jobs mentioned that Apple expects to get 48% mobile advertising market share after the first two months of running iAds.

This quick review of the iPhone 4 was made possible by http://www.macrumorslive.com/ as they offered live coverage from the event on their website.