Gaddafi Halloween Costume: Would You Wear One This Halloween? 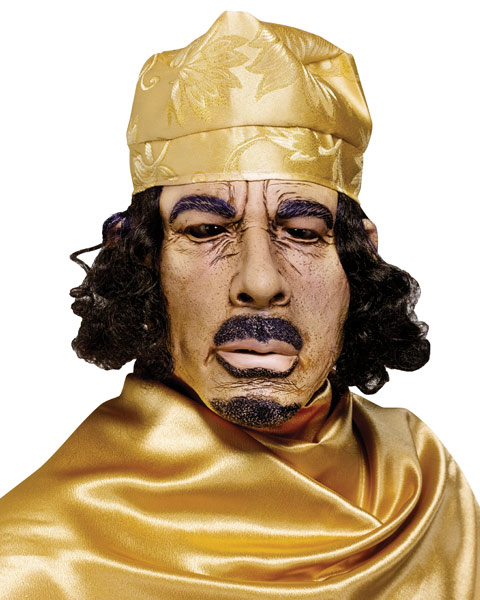 Some Halloween costumes sell much more than others. Best sellers can be related to anything. Sometimes, an extremely addictive computer or iPhone game can make a costume sell like crazy. This is what’s happening right now with the Angry Birds Costumes and with the Lady Gaga Tuxedo costume. This is what happened two years ago with Michael Jackson costumes for kids. Some other times, popular movie characters lead the game. This was the case of Avatar Halloween costumes, which went out of stock so fast that I only got to sell a few last year.

What I didn’t think of until now, is that political events can trigger costumes to become bestsellers. Looking at what’s happening in Libya these days, I could predict Gaddafi will be one of the most popular figures for Halloween 2011. I found a mask for you, just in case you like this idea:

Gaddafi Halloween Mask with Hair. Click on the image to see more details

Muammar Gaddafi is just another kook to come out of the Middle East. The Libyan leader is known for turning his country into a terrorist nation, complete with public executions of his own countryman who oppose his ways. How democratic of him! In the US where we have freedom of speech, if we don’t like something, we can protest it, or make fun of it, In this case, the Daffy Gaddafi Mask is a great way to poke fun at this nut job. The mask bears a striking resemblance to the proclaimed king of kings of Africa. It is an over the head full mask that includes hair. Its the perfect costume for daring guys who love controversy.

Would you wear this mask for Halloween? If you were in a group of friends, what other masks would be in your group?