New Halloween Costumes to Make You Stand Out from the Crowd 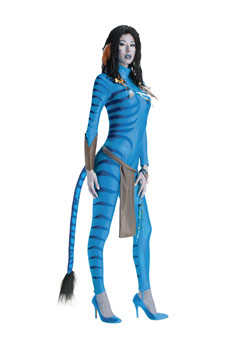 Do you want to get noticed at this year’s Halloween party? There are two simple ways you can achieve this.

The first way is to wear last year’s costume. Chances are people will notice and talk about you not being able to renew your wardrobe in 2010. If this is not quite what you had in mind when you thought you wanted to be noticed, get yourself a new Halloween costume. Choose wisely and you’ll be the center of attention. As usual, I took a look at new Halloween costumes for 2010 and came up with a list to help you get started.

The best Halloween costumes are those ones people can recognize from a glance. This is why movie costumes are almost always successful, provided that you choose characters from very popular films of the year. For 2010, you could go for one of the following:

James Cameron’s Avatar was surely THE MOVIE of 2009. Released just before Christmas, the movie won three Oscars and got a lot of nominations. Most of all, Jake Sully, the beautiful Neytiri and the Na’vi people’s story conquered our hearts and made some of us dream of the distant world of Pandora and its culture. If you can’t go to Pandora, you can bring a slice of it here this Halloween with one of these cool and sexy costumes:

The hottest movie of 2010 needs the sexiest costume of 2010. The Avatar Sexy Neytiri Adult Costume is a licensed costume that has James Cameron’s seal of approval. Step into this costume and get a sense of what it is like to be a beautiful Na’vi from the planet Pandora where aliens live in harmony with the wonders of nature. The Avatar Sexy Neytiri Adult Costume features a skin tight blue Na’vi jumpsuit with printed details. The jumpsuit has stirrup bottoms and a high neck so you get the most coverage possible. The costume as an attached loin cloth, tail and gauntlet on one arm. In order to make this costume perfect you can add the blue Avatar makeup, Na’vi ears and Neytiri wig all sold separately here.

Jake Sully is the paralyzed Marine who must take over his twin brother’s role as Avatar on the planet Pandora. There his must live among the Na’vi who are Pandora’s native inhabitants. But he falls in love with the beautiful Na’vi Neytiri and this changes his mission from helping humans take over their world to helping the Na’vi save it. The Men’s Deluxe Avatar Jake Sully Costume is your chance to dress as a character from the most spectacular movie ever made. The costume features Jake Sully’s tan jacket and pants. The Jacket has sleeves that look like Na’vi skin and the pants have long Na’vi tail with fuzzy tip attached. The best feature of this costume is the detailed face mask complete with the pointed blue ears.

Clash Of The Titans Costumes

Clash Of The Titans was another movie that got into attention and was appreciated by lots of people. Halloween costumes soon followed the movie, so here’s what you can choose from:

I added costume descriptions from the manufacturer, but if you want to know more about prices, discounts and shipping you’ll need to click on the photos above. I didn’t include those details here because they’ll probably change every now and then and I don’t like to go back and edit my posts.

Do you know any other movies you’d like to see costumes made after? Name them in the comments, then I’ll find those Halloween costumes for you and add them here.