The ice complex at Balea Lac: hotel, church and more 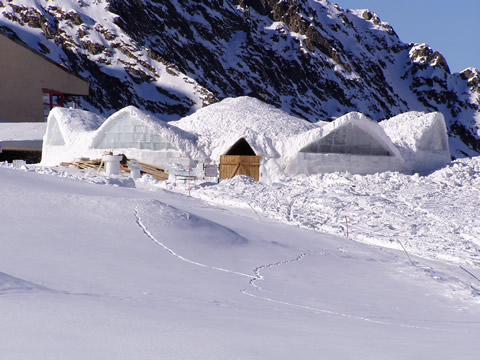 The ice hotel at Balea Lac is at its second edition. In 2006, the builder had some troubles with the local authorities, who asked him to shut down the place, claiming that he does not have all required authorizations. Once the problem solved, the ice hotel was open again, and more, it was rebuilt again this winter, without anymore troubles. Additionally, this year, an ice church was built nearby the hotel. It took 30 workers one month to build it. The ice blocks were cut directly from the nearby lake. The church has more than 60 sqm and it can accommodate 60 people. No more than 2 candles will be simultaneously lit in there, in order to prevent the ice church from melting.

At the height of about 2000 m, tourists of all religious beliefs can come and prey, every day. According to Arnold Klingeis, the owner of Balea Chalet and builder of the ice church, priests from all cults can serve there everyday, as it is the first ecumenical church in Romania.
Source:Libertatea Online (Romanian language)

The main TV stations covered the news, and if you want, you can watch a short video from the opening ceremony, broadcast by ProTV.

The project will be completed with a garden of ice sculptures, which will be officially inaugurated on February 1st.

Since their opening, on January 6th, the ice hotel and church at Balea Lac welcomed more than 2000 guests, out of which, about 600 were from abroad. The hotel has 12 rooms and the price per person for one night is about 20 – 25 Euro.
Source: Sibiul.ro (Romanian language)