Do You Hate Selling? Here’s How to Love it

This is a guest article by Michael Martine. 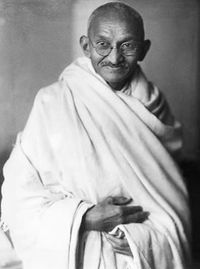 Do you find the thought of selling distasteful? Does it conjure up in your mind’s eye images of peddling an unwanted product or service to a dour-faced prospect whose objections are impossible to overcome? It doesn’t need to be this way. You can love selling!

The secret of loving to sell is to not do it. Don’t sell. Was Ghandi “selling” when he presented his vision for gaining independence for India without violence? Was John Lennon “selling” when he communicated his ideas about peace through his words and music? Was John F. Kennedy “selling” when he gave his speech about putting a man on the moon? Were these people selling?

Yes… and no. The reason why they were so successful at gathering people to their ways of thinking is because they presented an impassioned vision of hope. We all want to feel hopeful. We all want to feel that we can live up to our potential. Hope is an attractive force that draws the hopeful in to ideas that offer the possibility of meaning and fulfillment in our lives. Martin Luther King, Jr.’s “I have a dream” speech is one of the most hopeful “sales jobs” ever.

“Yes, but I’m no JFK!” I hear you say. True, but neither am I. You don’t have to be a JFK or a Ghandi. All you have to do is examine how they “sold” and emulate that. Consider the following:

It has long been said: “sell the sizzle, not the steak.” While it doesn’t condense into a pithy soundbite, what I’m saying is: sell the hope of a satisfying, fulfilling meal and family togetherness, which are the rewards of a life well-lived. The purchase of a steak is an outward symbol of that feeling that reinforces and amplifies that feeling.

When you change from selling people to offering them hope, you can go from detesting selling to loving it.

Michael Martine has a vision of hope that entrepreneurs grow and strengthen their customer relations and revenue through blogging. To achieve this vision, he helps them set up and run successful blogs.