Digital SLR cameras are cool, but they have a major drawback: they are big and heavy. When I wrote the Canon EOS Rebel T3i review the other day, I didn’t mention this, but weight can sometimes be an issue. I like the T3i and I’m probably going to buy it. However, I want a small camera as well, so I can carry it with me in my purse when I go for walks. But will a small camera take photos or make videos as good as a DSLR? For the average user like me, the answer is yes. Here’s a P&S camera which is fairly inexpensive and which can make full 1080p HD videos: Canon PowerShot ELPH 300 HS

I’m not necessarily a Canon addict, but after looking at a few compact cameras, I decided the Canon PowerShot ELPH 300 HS

offers the best value for money. Here are a few reasons why I believe this camera really makes a difference within its class:

How the wide-angle lens allows capturing more of the scenery. Click on the image to read more about this on Amazon.

has a 24mm ultra wide angle lens and 5x optical zoom.The manufacturer claims it’s the world’s thinnest digital camera with these features. Thinnest or not, I like the idea of being able to take pics in a format which is equivalent to the 35mm film. As you can see from the image, the 24mm wide format allows you to capture more of the moment. The 5x optical zoom is awesome for capturing details of subjects you can’t get too close to. There are digital cameras with far more than 5x optical zoom, but they are much bigger. To quote Canon, “you don’t need to sacrifice style for power”.

This Canon digital camera has optical image stabilizer. This is great, because my hands usually shake a little bit just when I press the camera button, so it’s hard for me to take excellent pics without a tripod. The stabilizer allows you to obtain perfectly focused pics, even when your hand moves a lot while pressing the button.

Like other Canon point-and-shoot digital cameras, the ELPH 300 HS features the HS System with 12.1 Megapixel CMOS and DIGIC 4 Image Processor. If this is all Greek to you, let me translate: this means you can take great photos even in low-light situations, without needing to use the flash. Moreover, it lowers noise level at higher ISO settings. This is a major advantage because many inexpensive cameras are only great for outdoor shooting. This one allows taking awesome pics at indoor parties as well. 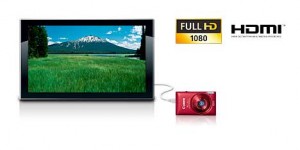 Shooting full HD movies is fun! This is one of the reasons I want to upgrade my point-and-shoot camera. I want to be able to make full HD videos with sound. This is something my current camera can’t. The Canon ELPH 300 HS has a dedicated movie button, easier to access than the older solution of making the video mode just another position on the mode wheel. Another awesome feature is the ability to zoom while taking the video. Operating the zoom while shooting allows you to focus your movie on details or actions you want people to notice. The footage will be steady and nice, thanks to the Dynamic IS which will stabilize the image for you.

The camera has the possibility to shoot in high speed (about 240 fps), which then allows you to watch the videos in slow motion. Water splashing, sports scenes, wild life situations, everything can be fun and unexpected when watched in slow motion.

You don’t need to learn heaps about diaphragm, aperture, exposure, focal or any other such things in order to be able to take awesome photos. The Smart Auto system detects what kind of scene you want to shoot and automatically adjusts to optimal settings for each situation. This is possible thanks to 32 predefined shooting situations that are stored in the camera’s system:

The camera automatically selects the best shooting settings for optimal quality based on subjects and environmental factors to provide point-and-shoot simplicity.

Records a video clip before capturing a still image and then combines one day’s worth of clips into a video.

The camera sets a large aperture, focusing the subject and artistically blurring the background to make your subject pop.

The camera automatically takes the photo when people smile, wink, or get into frame.

The camera shoots continuously at a high speed of approx. 8.2fps while you hold down the shutter.

The camera takes five photos in succession, and then chooses the best one out of the bunch.

Suppresses image blur even without the help of a tripod.

For high quality image capture in an amazing range of dimly-lit situations.

Add a classic photo distortion without a fisheye lens.

Emphasizes perspective for a miniature effect by blurring upper and bottom portions of videos and stills.

Simulates photos taken with “toy” or pinhole cameras, darkening the image at the edges to create a vignette effect.

Choose to retain a single color in your image while other colors turn monochrome.

Select a color and replace it with a color you specify for special effects.

Get clear shots of people at a sunny beach without darkened faces.

Most reviews I found were positive, people were happy with their new camera. Even DSLR owners like to have a point-and-shoot and they seemed to appreciate this one for various reasons.

I’m a DSLR photographer who shoots professionally and has managed a camera store in the past. I wanted something I can take with me everywhere but still produces good quality shots. I also wanted a camera that could shoot good looking videos. I researched several models and after much deliberation decided on the Canon 300 HS. I’m very happy I did.

Good point and shoot camera. Bought it for my father. He loves it. The camera renders nice pictures with good contrast and color.

I am a horse racing photographer. I was needing a camera to have in my pocket, just in case. I shoot with Canon equipment. I trust Canon. I love the little thing.

Even in quick shots, in tough lighting conditions–it produces great shots. Could be the perfect “point and shoot”.

I purchased this camera as a replacement for a Canon PowerShot SD770IS 10MP Digital Camera with 3x Optical Image Stabilized Zoom (Black) and absolutely love it. I was sold by the ELPH / Digic 4 Processor on my SD770IS and after having this newer model for a little while now it has only improved.

You can go to Amazon

to read more reviews or buy the Canon PowerShot ELPH 300 HS digital camera. There’s a $20 discount as I’m writing this. Besides, it is eligible for FREE shipping with the Super Saver Shipping program.