Online, Offline, What Difference Does It Make For The Bear? 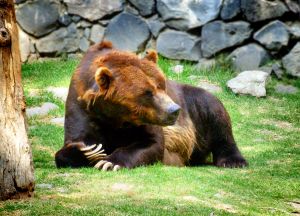 How many times in your offline life did you feel like you were tired of all “social rules”, of all those who were better dressed than you, who drove cars better than yours (in case you had a car), of all those who had less education than you did and still told you how to see right from wrong?

Then, one day, BINGO!, you discover there is another way. The online way, where nobody cares about your car and about your clothes, where everything that matters is what you have to say and the way you say it. This surely feels good, you smile and start planning. You read a couple of books and a dozen of blogs, then you realize that you have something to say and that you can say it at least as well as those online famous people do.

And you start saying it.

When we were children, we had this saying: “could you talk in a bag, so I can listen to it later, please?”. Why did I remember this exactly now, when you are on your way to telling the world about your thoughts? I don’t know, it must be my subconscious mind, which refuses to believe what seems to be a reality:

IT MATTERS LESS WHAT YOU HAVE TO SAY AND HOW WELL YOU CAN SAY IT, THAN WHO YOU KNOW AND HOW MUCH YOU ARE WILLING TO SOCIALIZE.

Did you expect it to be different? Did you expect that a solitary, antisocial bear would be successful online? Why? Only because people cannot see the cave around him?

My dear bear, you were so wrong! Who makes the online world? They are people, not robots, what did you expect? Do you want recognition? What are you willing to do for it? I can give you a few hints:

You did all the above, you see some results but you’re still not satisfied. Well, there’s more: INFLATE YOURSELF. I don’t mean here that you should lie. You should never lie, because liars are scumbags, and nobody likes them. Just sign up with Google AdWords and buy some cheap traffic (there’s no affiliate link here, don’t ask why, Google just doesn’t like bears outside US, that’s all). Do you think AdWords is too expensive, or your ads suck so badly that nobody ever clicks on them? There is plenty of cheap traffic you can buy in other places. It is true that it doesn’t convert, but it can help you reach your goal: be sure that if you can buy enough traffic to break Alexa’s top 10,000, you’ll start to get noticed. How? Smaller bears will start to tame you, in their attempt to become big bears.

Our bear could ask himself after all this effort: “Why, then, should I strive to quit my day job and make a living online? Only to be able to move my body from my natal cave to far away ones and still be able to feed myself and to change my fur every spring? What about my spirit? Will I have to kiss tails all my life, be it online or offline?”

Do you have an answer for the little bear? Online, offline, what’s the difference? Please, have your say now.